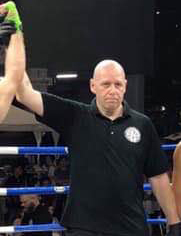 For any International Title, there are only two ways of judging possible, without exception.

A. One judge from the host country, one from the opponent’s country and one neutral judge.

B.  Three judges from a neutral country.

The ring referee can be, however, from any country. It is the responsibility of all judges to judge the fight fairly and without prejudice. All rounds will be single round scoring.

The supervisor has to fill in the scorekeeper card and to confirm the result, which he must report to our head office within 48 hours.

Weigh-ins for Title fights must be done at the latest 24 hours before the fight.  The appointed supervisor must be present during the weigh-in. Both fighters must weigh-in at the same time, and on the same scales, either both managers or coaches must be in attendance.Video weigh-ins are strictly forbidden.

Mandatory medical checks are required for both fighters by the official medic/doctor.

If you disagree with the result, be courteous. Make an official protest ringside immediately after the result by the attended WKA supervisor or send an email with the protest clearly defined to WKA International Head Office info@worldkickboxingassociation.org. Our Head Office will make the final decision.

If you do not agree with the result, you can make an official protest ringside straight after the result to the WKA supervisor or send an email with your protest clearly defined to WKA International Head Office info@worldkickboxingassociation.org.

Our World President and senior team will make the final decision.